Today I will make the review of a super new release, the Irish Troops from the War of the Roses! 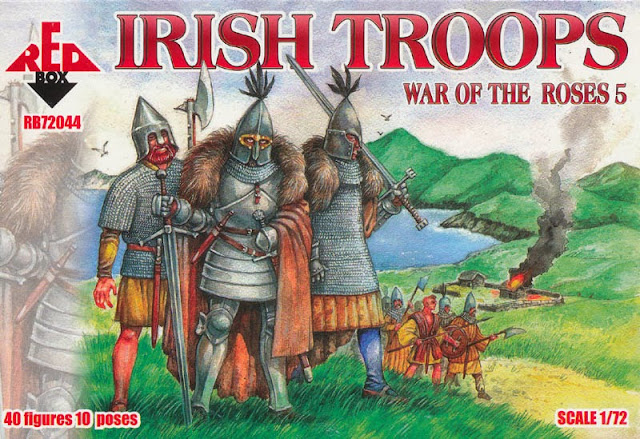 Box; A complete success in my opinion. Okay, is not a very perfect drawing, but it very nicely depicts the subject, with lots of charisma, showing the figures you get.I was hooked when I saw it and the box art prompted me to buy it. 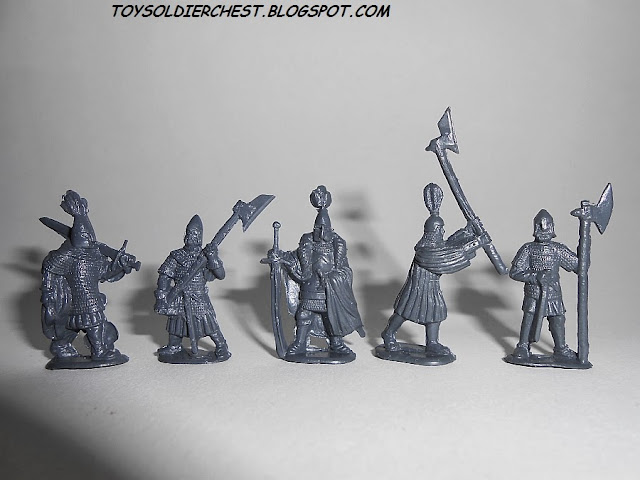 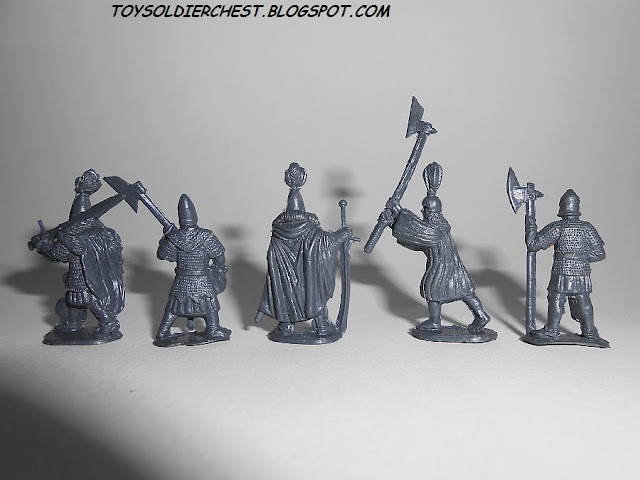 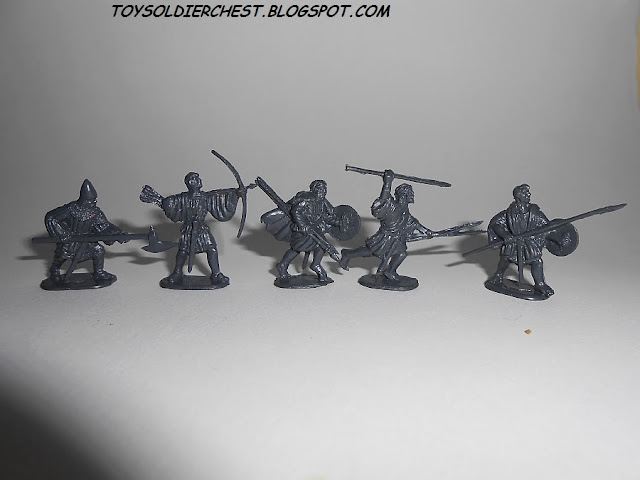 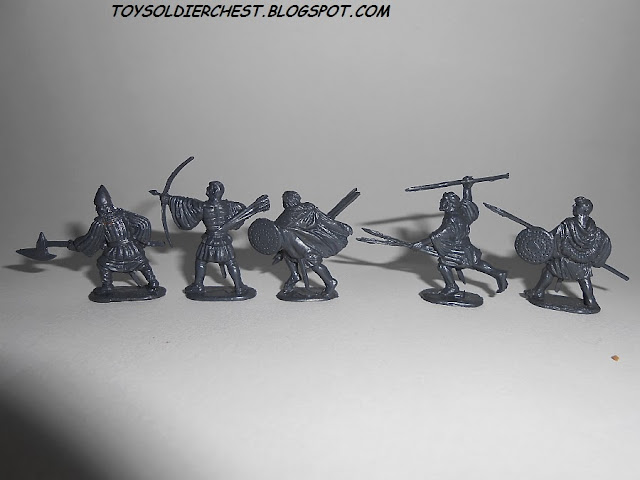 Detail; Are these figures really RedBox, or some alien with sinister sculpting powers have substituted them? no, RedBox have improved, and these are figures with sharp detail, reminding me of the first Strelets sets, but maybe even better.They lack the fine detail of Italeri or Zvezda, but these are figures that will be easy to paint, as every piece of detail is clearly defined.


Poses; Good set of poses, we have the famous "Kerns" (Skirmishers), a sort of leader, nobles, archer, many halberd troops and one spearmen. The bad thing is that there ares just 10 poses, and really, 12 is the minimum. All the same, if we have to live with 10 poses, then the choice was quite good.

About the poses themselves, all very nice, active, and well executed. The skirmisher running is one of the best attempts at this pose I've seen.

Anatomical proportions; Excellent. Not as good maybe as Esci or Caesar, but in the top league. They aren't giants as Zvezda, don't have big heads as Italeri, they are not trolls like Strelets, etc.

Execution (how the company has made the figures); there is a certain quantity of flash, but if we compare with other sets of RedBox this is nothing. The good thing is that it is easy to remove, it is a "clean flash". In other words, it is a bit of excess of plastic here and there, but clearly defined. Not like the Koreans or Chinese light infantry, where it is everywhere, and when you try and remove it, the figure ends up scruffy and looking awful if you are going to paint it.

Also, the sword of the leader is not flat, but in a cross shape, clearly to help casting, and you will have to cut it to leave it flat.

Sadly, the War of the Roses is one of the few themes I don't have much knowledge about, basically because it escaps my scope of interest. Then, why on earth I am reviewing this set? because of it's Medieval (and Dark Ages) usage. After consulting the matter with somebody with more knowledge than me, and after a bit of research, I can say this is a solid set, with no big inaccuracies.

Maybe, there shouldn't be two so well armed nobles in a 10 pose set, but this is a thing of proportions not historical innacuracies. The light troops with the standard round shield is maybe a bit strange, but in any case, RedBox have actually tried to make something different, where there was not much historical info, they have tried to get what there was, and do it as best as they could. And they have succeeded in my opinion.

ARMY REPRESENTATION - 8.0
"The army representation score is the potential of the soldiers to be used for other purposes different to the one originally intended"

Besides the two men with the strange hairdress, the rest have plenty of usage. First, all men can be more or less used as late medieval Irish (1350 on). Many men can be just medieval troops from the north of europe, the light troops could be used as many sort of barbarians and,
with some conversions, these figures can even have more possibilities.

As I've said, RedBox have gotten a bunch of loose historical info and has made a solid set with a distinct "flavour" and appearance. All men are active and combative, except one. And they all have a sort of personality.

The only bad thing is the small number of poses, and the 4 leaders you have to accept, so conversions will be mandatory.

Even with few poses, the good choice of them gives a minimum score.

They are nicely done, and at the average price of 10 € roughly, where most sets are  today. There are just 40 figures, but at least they are not as expensive as some new Mars sets of worse quality.

This is a set not only good for those who like the War of the Roses era, but also to the Medieval collector/wargamer. I hope that this improvement in quality with RedBox continues, and if they keep this level they will soon disbank Strelets and become one of the best 1/72 manufacturers in the market.

Conclusion; A set as sets should be, as they were in the golden days.

Would I recommend buying them over other alternative sets? ; There is no alternative, and will hardly be ever I think. But if there was, I hardly think it will be better.

At the moment, I don't know if they have been painted yet by anyone! Be the first on the net to show them!

Thanks for reading, and see you in the next battle!
Posted by Argenta-2008 at 7:50 PM
Email ThisBlogThis!Share to TwitterShare to FacebookShare to Pinterest
Labels: 1/72, 1450, dark ages, eire, figures, gaelic, ireland, irish troops, lancaster, late medieval, medieval, miniatures, rb72044, redbox, soldiers, tudor, war of the roses, york