This is my scratchbuilt Marmon-Herrington. Made a very long time ago, I recently restored it. Not perfectly accurate, but it was fun. Absolutely everything is scratchbuilt, even wheels, guns, etc. Basically everything is clear plastic from packaging, etc. Wheels are casted in resin. 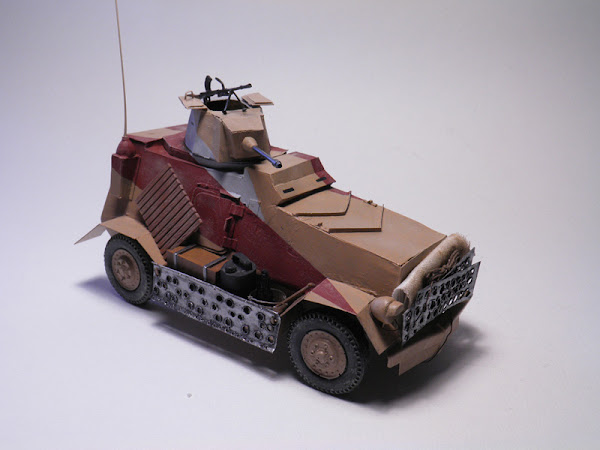 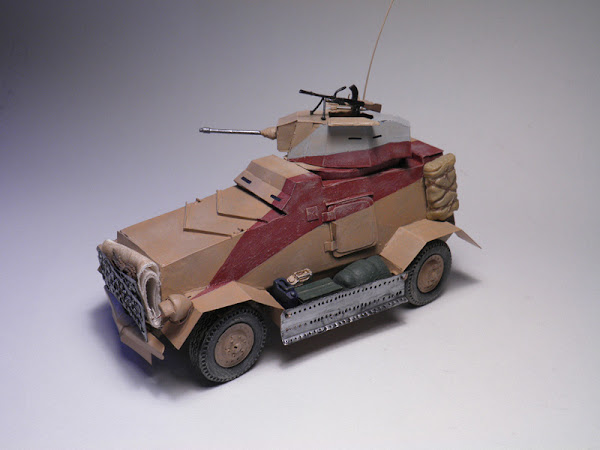 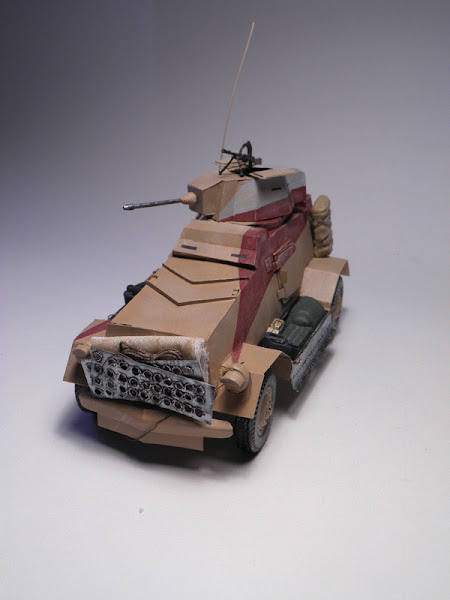 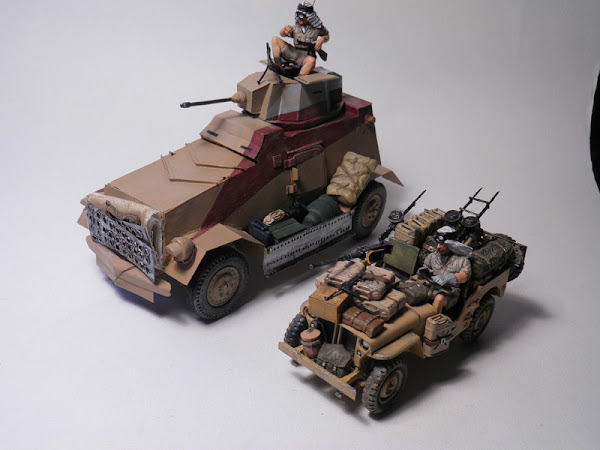 Before restoring my own build; 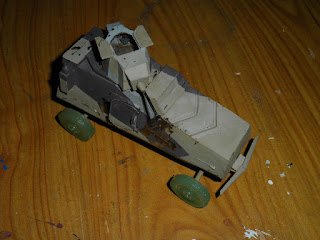 I did post here a long time ago, regarding a kit I bought; in a good closing down sale, I managed to buy a very cheap 1/32 Arado Ar 168, and decided to keep it and give it as a present to my father. Unfortunately, when he was going to start building it, parts were missing! the quality control at revell had not noticed about 3-4 sprues missing! never something like that had happened to me, after buying thousands of kits.

It was lacking canopy, bombs, engine doors, and most important, the floats. By this time the shop had already packed and closed down, so no claim there. (all the same, the very nice chap that bought the shop, gave me a free model in compensation, even if it was not his fault!). I contacted Revell, but was told that only they could send the canopy, as the Arado ar 168 was no longer in production, only the single float version.

So, after browsing all the possibilities, I decided to scratchbuild with paper and cardboard the floats, after printing them from a paper model and adjusting them. My father built all the plane, and me and my brother built the floats and created the engine covers, plus giving a few extra finishes to the paintwork.

The pilots came in a lot of soldiers, I believe from some very old model, but they fit wonderfully.

Curiously, it is a floatplane, but better it doesn't get anywhere near water with his paper floats! 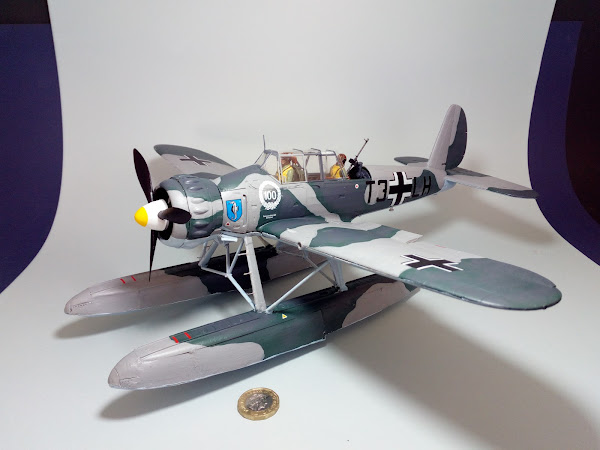 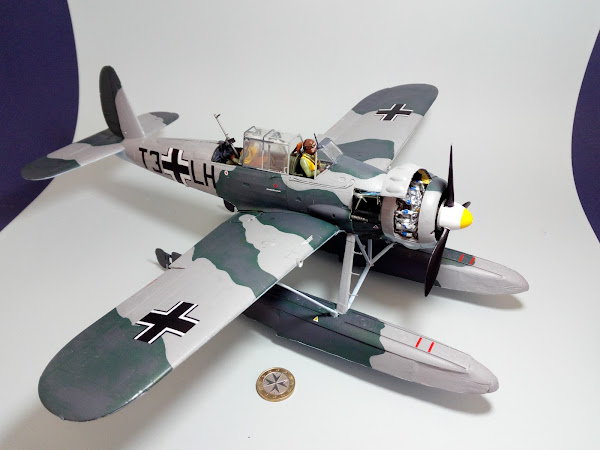 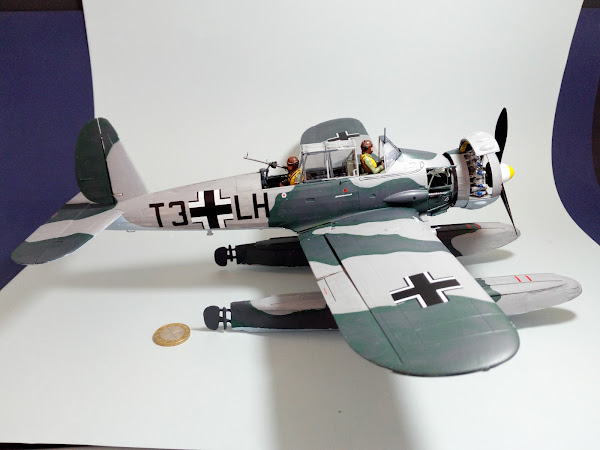 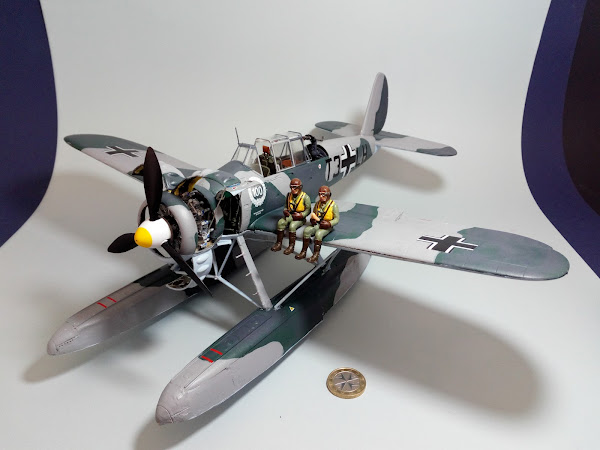 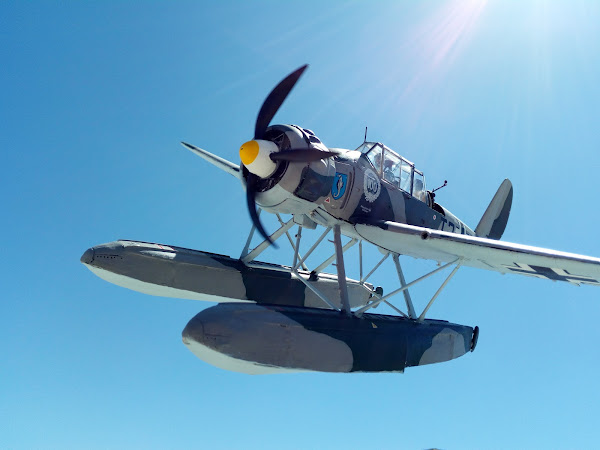 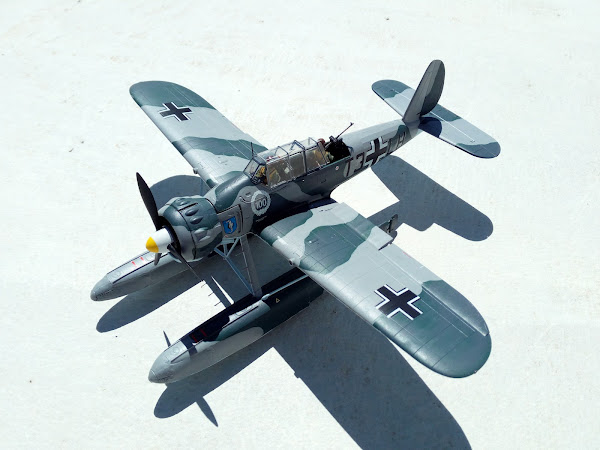 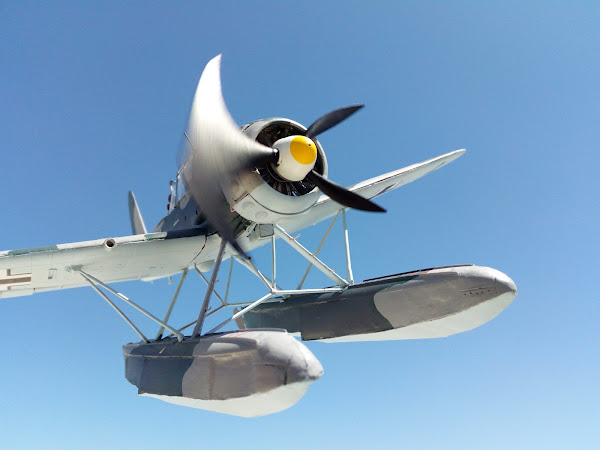 US Light Infantry Dragon; we move from the behemoth to the moth :lol: . As tiny as you can get a motor vehicle in 1/35, more or less. A interesting and nice kit, I saw it for about 5 € in a fleamarket, and to the stash it went. The good thing is that it came with another set inside! a very pleasant surprise, as a kit of just two men and a motorbike is a daylight robbery in my opinion. Always saw it for triple the price, and half the content! Got round to do it two years ago, just made proper pictures last week. Very fiddly kit, nothing really fitted in that bike, everything went on your own interpretation. The whole bunch was a wobbly bit of engineering with the polycement drying on! As I had two, I painted them in very different ways; for Kosovo, and for desert war, Iraq, Libya, you name it. I switched the heads on two of the figures. 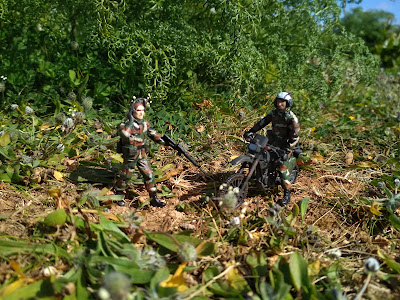 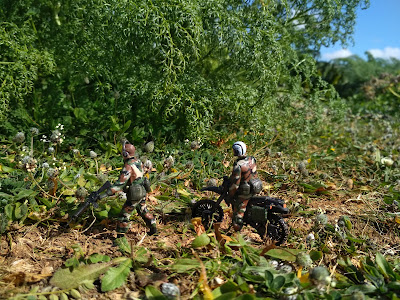 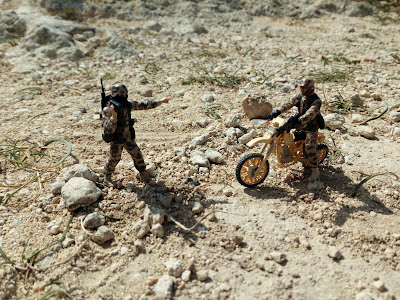 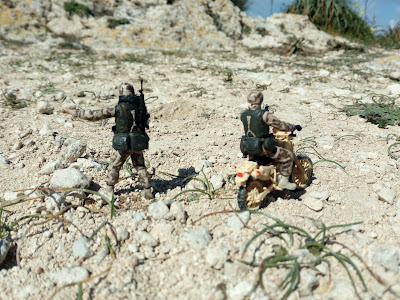 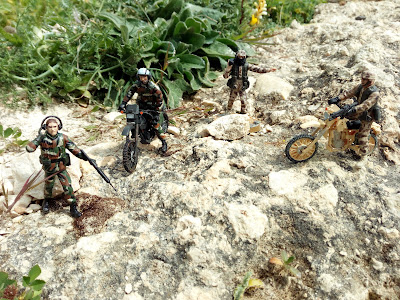 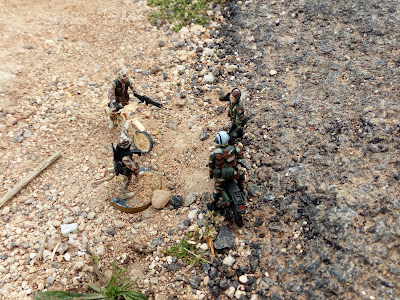 Here I show you a model finished a good few years ago. Quite a complicated kit, huge in size, one of those special kits that are unlike anything one has built before! my first model that I airbrushed, as hand brushing all that intricate parts was daunting indeed. For those who wonder, the crew is WW2, but as one was used then, it can still be called historical :) . Sadly, no WW1 german artillery crewmen in scale was available then! and I think not yet, except for some very obscure resin ones. Will be posting here the rest of my 1/35 kits for easy finding. 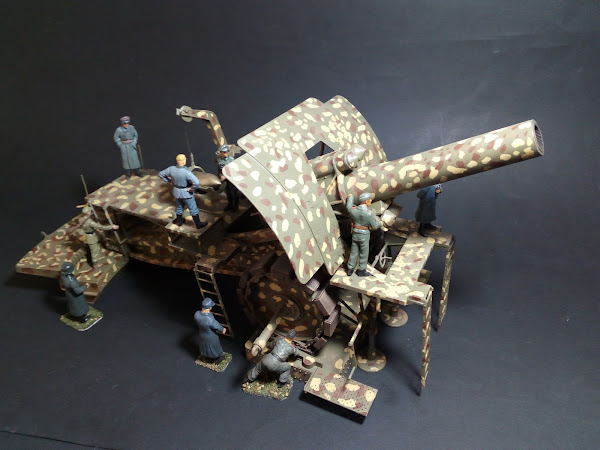 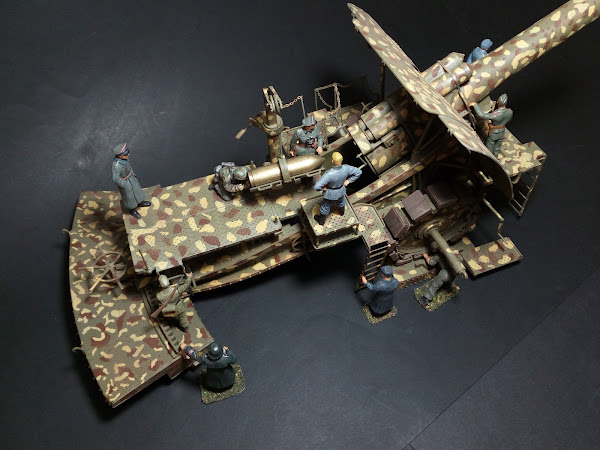 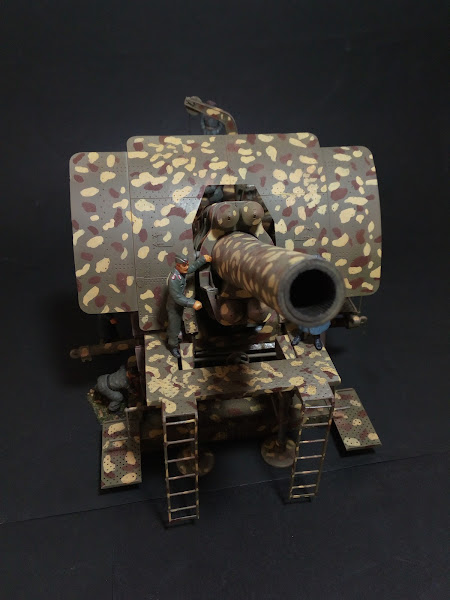 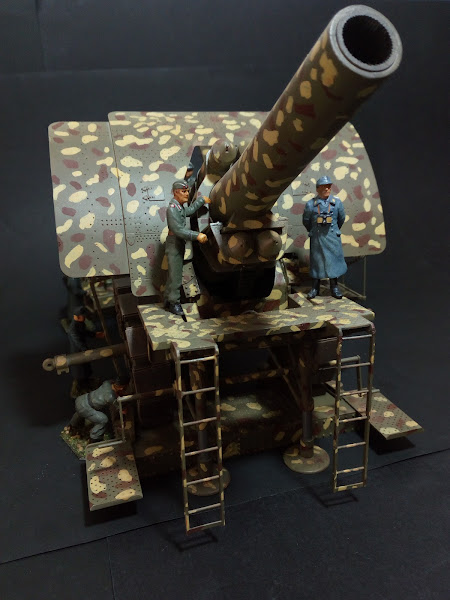 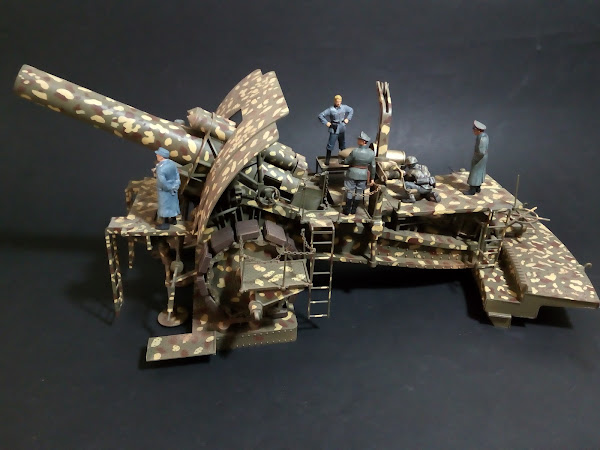 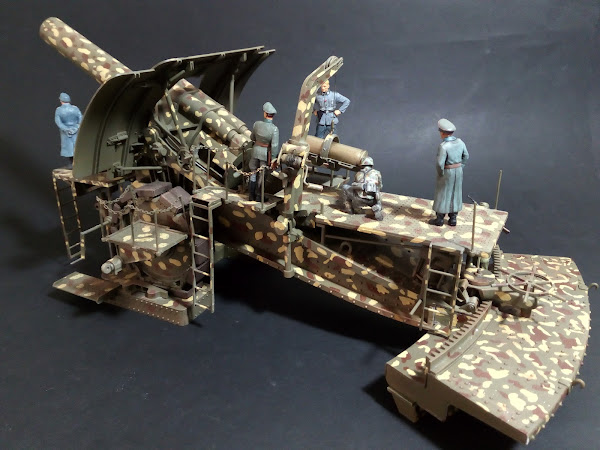