Yet another Italeri review (I have no special preference for this manufacturer, but a great majority of my desert model kits are Italeri), the Morris Quad with 25 PDR. gun; 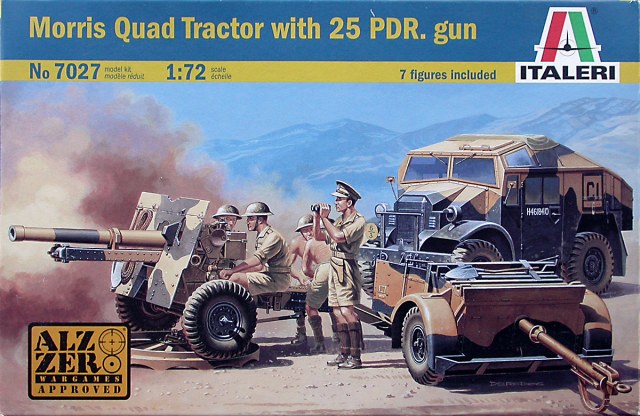 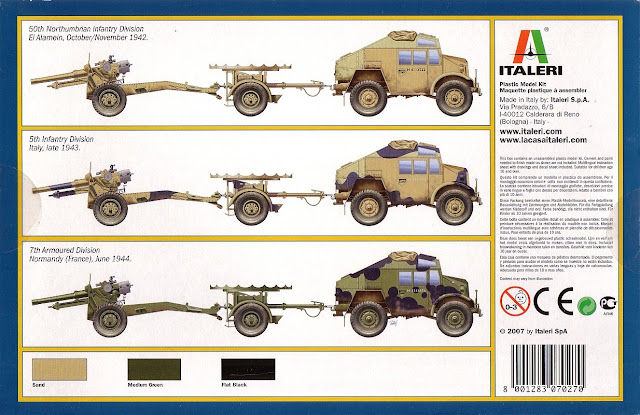 This model is really two Esci models into one box, the 25 PDR gun and the Morris quad.

We can see here the original boxes (prepare to see quite a lot of images! (click on the picture to see them in big)); 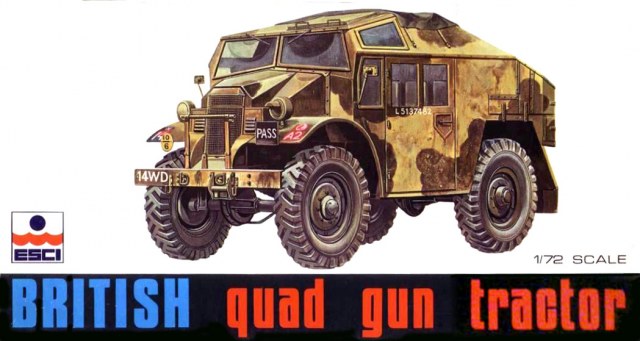 The original box, nice and realistic. 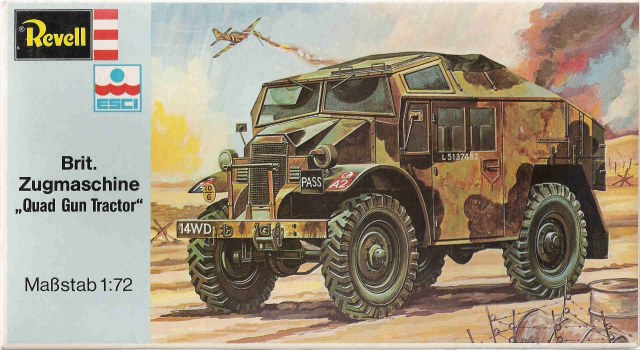 A Revell reissue, with a nice background. 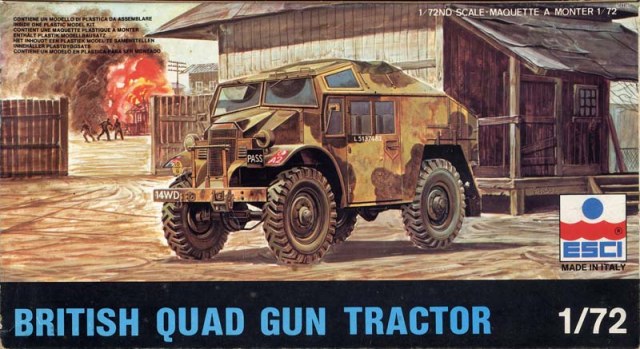 Later Esci decided to give a background to all their boxes, and this maybe looks a bit strange, as it looks like France more than the desert, I suppose it represents Italy. 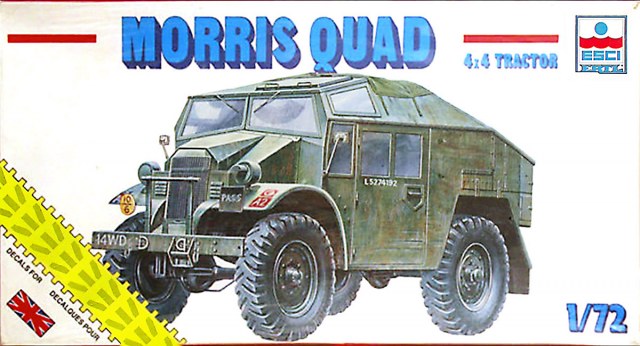 And later, Esci thought that the white background was better, so back again the white and now with a different artwork. I think on the whole I prefer the Revell one. 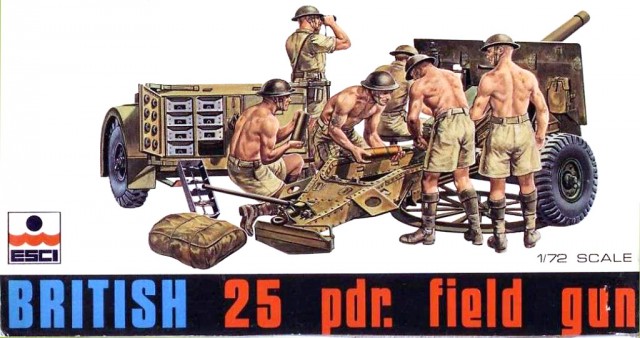 A nice and clear artwork. As a curiosity, the men drawn are different to the figures, as the officer wears a helmet and there are more shirtless fellows. 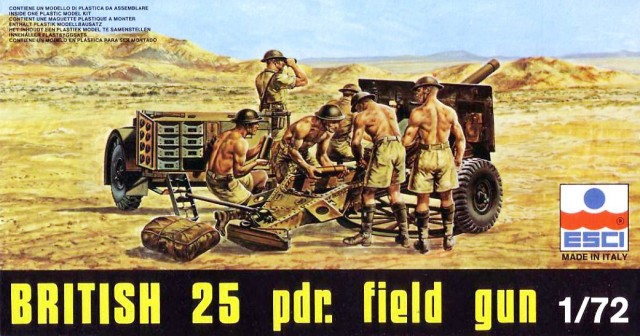 The same with background. Is it 10 times better, or it is just me? 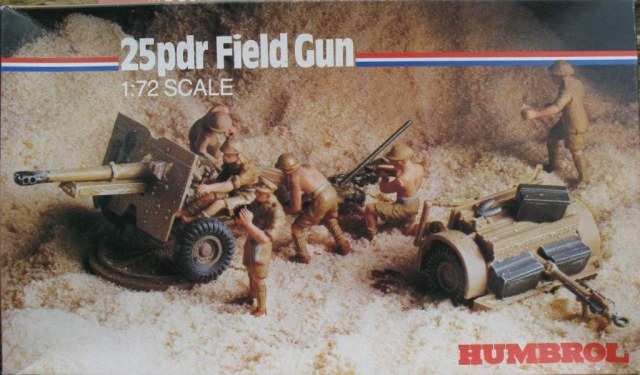 And now the Humbrol, which is just the model in a diorama. They have got a nice shading of the desert, better than my model. But I think that showing the model normally doesn't attract a buyer as much as a good artwork.

One of the curious things is that this kit is a scaled down Tamiya kit. I don't know to what extent Esci did this, I am still quite puzzled. How do I know? Obviously, there isn't the same exact parts, but everything looks built the same way, and the figures are exact copies. I suppose Esci had permission from Tamiya. I would say that, maybe except the wheels, everything is scaled down. I don't have the model of the Morris Quad, but probably it is a scale down too. Other kits such as the Fiat Ansaldo is also a scale down (this time from Italeri) (at least, judging by the driver and hull construction). Were all Esci kits scaled down from other manufacturers? Did they ask for permission? I don't have the answer, but it gives you something to think about.

Returning to the kit, it has nice detail, and it is easy to build. Probably better than the average Esci. Things fit very properly, and the details are well done.

The only difference between this kti and the Esci kits is the inclusion of a clear sheet of transparent plastic to make yourself the glass of the Quad.

The only thing I see a bit strange are the wheels of the cannon, I see  them as a bit small. You can judge for yourself with this pic; 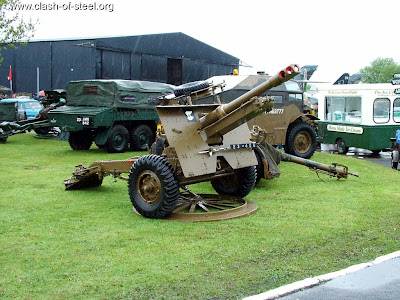 6 crew and plenty of ammunition boxes are more or less the maximum you can ask. Originally, as the cannon was sold separately, it was absolutely needed to add an extra, but now with the lorry it gives a very high score.

The figures have good sculpting, although the detail is not sharp and is a bit diffuse in some places (handicaps of scaling down 1/35 figures). The figures have separate arms which you have to glue, and some separate legs. The poses are very good, all of them working closely with the cannon. The only thing is that I can't work out what the man with the shirt and helmet on is exactly doing, he is like walking while carrying something in his hands, and he doesn't carry anything. So it would be recommended to give him some box or a rifle or make him move the trolley. The officer with the binoculars is very charismatic, he resembles General Percival (at least the 1/35, where you can see the face detail)

The back of the box gives you more or less everything you can do, except the all green one. But if you paint it green, the men without shirts will look a bit strange in the middle of France :) , and you will have to get another crew.

10 € for a lorry and a cannon, well done and with 6 crew, it is a fantastic price. Ok, it maybe is an old model, but all the same Italeri charges more or less the same for one vehicle without crew nor cannon, as old as this one.