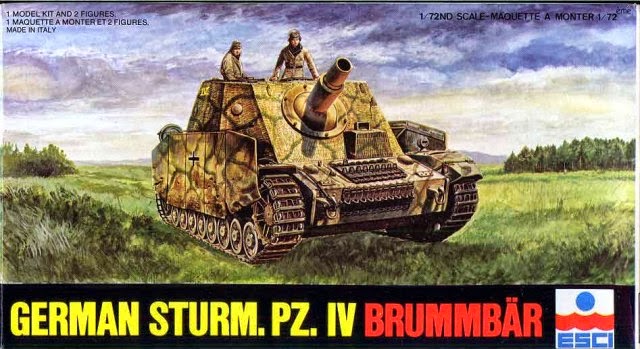 This is the original box. It looks dead weird, the tank seems that it is floating, the cannon is longer, the crew seems american and the shadows are incongruent. One of the worst early Esci boxes. 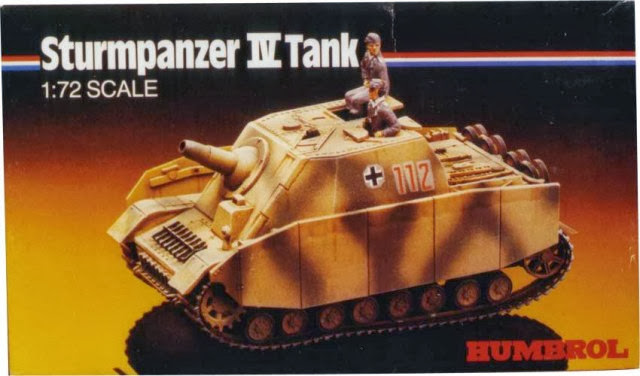 Here there is the typical Humbrol box with the model completed. The model is nicely done, except the decals which you can obviously see were very poor, the days were decal-setting liquid wasn't as popular or common as today.

What I have just noticed now, is that this model had elastic tracks, not rigid ones. I don't know if the modeller just changed them or Humbrol changed the tracks. 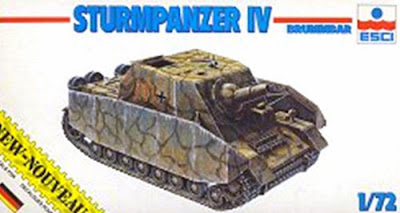 And finally the last Esci example, a dark artwork which at least shows better proportions than the first one, and looks quite temible. 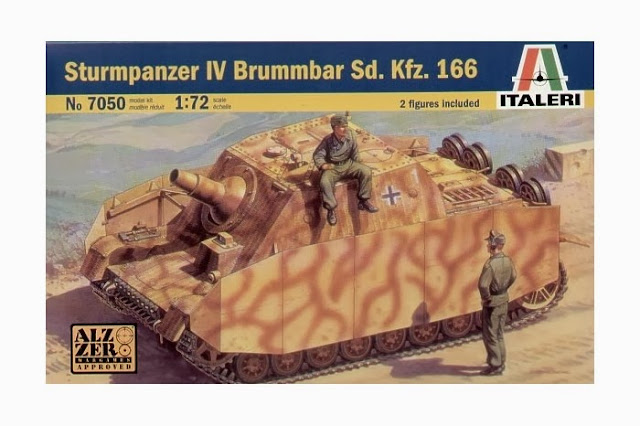 A very interesting box, nicely done. Depending on how you depict the Brummbär, it can look quite boring, a Jagdpanzer with short cannon, but this artwork makes it look very interesting and different.

Just on a side note, the artist depicted the Brummbär with Zimmerit covering the body, and the model kit doesn't.

One of the best Esci kits, it stays very well up to date. Detail is crisp (I think it was one of the kits that wasn't very mass-produced by Esci, so the moulds are in very good condition) and everything fits nicely. Fitting the side protections can be a bit tricky, but it is nothing that patience and super glue can't solve.

With it's crew of 2, you get 1 pilot more than the average, so I suppose one can be happy here, where actually the norm is no extra at all.

The Brummbär, as many late german tanks, has been blessed with an array of very interesting camouflages. It makes me want to build several just to use the camos!

Here I show you just an example (the first pic is the back of Italeri's box); 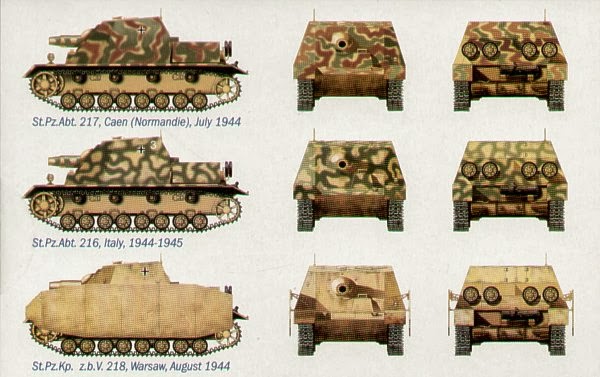 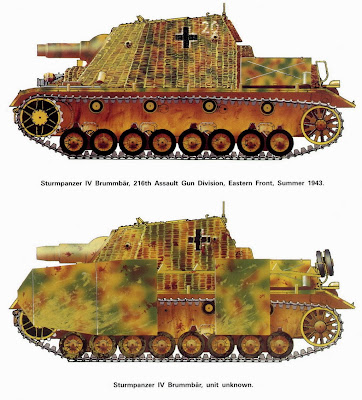 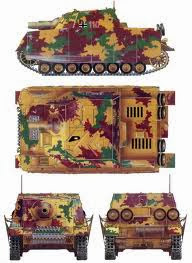 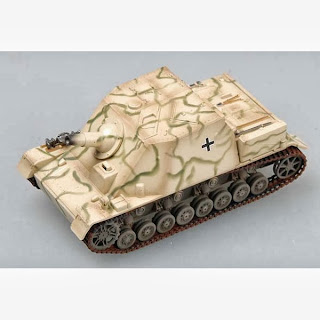 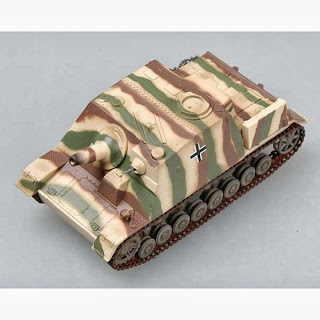 It's not really very cheap, ranging at about 11 pounds shipped. A bit cheaper on retail usually. Considering that is a quite old model, and it has to compete against the Dragon and the Trumpeter models which are superior and at least the Trumpeter cheaper, plus the ready built models from Easy Model.

If we count all the Sturmpanzer's versions (this model kit is the Mid-production model, the late version differing hull shape and added gun, but quite similar nevertheless) 298 were built from 1943 to 1945. It fought in all the active fronts except North Africa. Even if they weren't built on massive numbers, they had a good amount of combat.

You can find out more here; http://en.wikipedia.org/wiki/Brummb%C3%A4r

Not very hard to build, one of the easiest Esci kits. Just the side protections will be a bit of a problem.

This model kit has a tough competence, Dragon and Trumpeter, makes this exact version with lots of detail, much better than this one. Even Trumpeter makes also the late version. But personally this is still my favourite; the inclusion of the two pilots, and the lateral protections (if you have a spear set of these, and two spear Esci pilots, better you buy the Trumpeter), makes it my choice, as detail and accuracy comes second in my preferences, always considering that it has a decent level, which this kit has.

In one phrase; Much more than a Panzer IV with a heavy cannon, this kit is worth having. 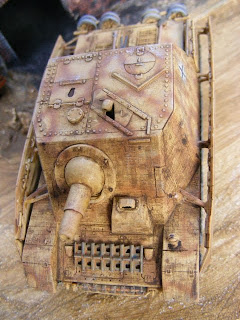 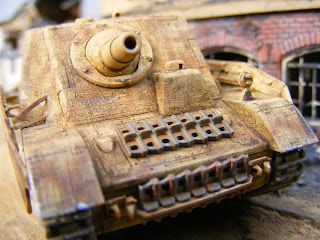 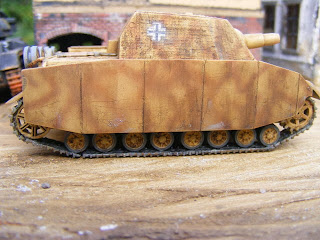 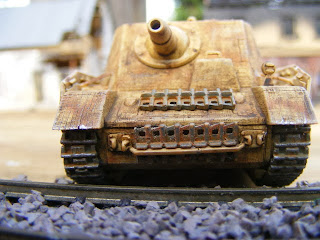 Thanks to Neil Lyall for his permission to use the photos you've seen of his beautifully made kit. (he added the Zimmerit on the body). 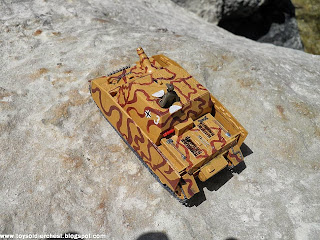 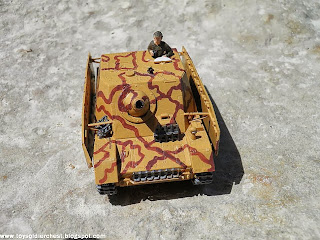 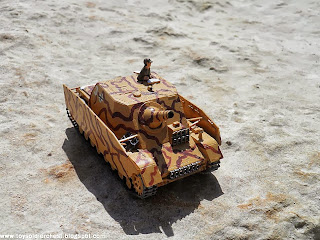 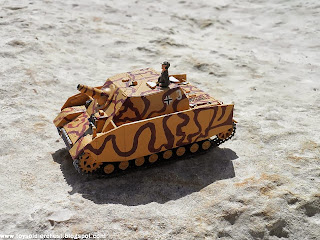 Model kit made by myself, painted with enamels. If you wonder why it doesn't has the other pilot ,the sad answer is that; it was lost in combat that same day, while taking pics! sniff! we will remember you, Fritz!

If you have enjoyed this review and you want to support the blog, it will be very appreciated if you could make a click in the advertising of the blog! (Thanks!);