Today we review a combined set of infantry of artillery, the Cannone 149/40. Let's see what it can offer to us. 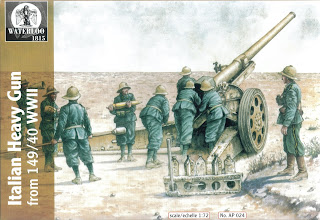 I didn't know that this kit was originally made by Waterloo 1815, until some time after. The artwork is correct, but it makes look the cannon smaller than what really is. 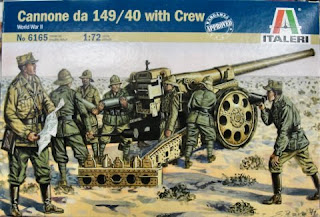 The artwork is quite good, depicts what it should, and gives a good sensation of Italian colonial era. Could be a bit better but it does the job. The box is quite gigantic for such a small kit, which I always don't like (it makes me feel ripped off!).

I am usually in favour of fast assembly kits, being my basic interest wargaming, (although I also enjoy building anything), but this fast assembly was made too fast. It is at level that you don't need glue nor any kind of previous knowledge, easier than a Lego building set.
The main criticisms for this is that the cannon move up nor down, which usually is the minimum feature you ask for in a gun. Is not just that, but the wheels also cannot be made to turn, and they are fixed in the firing position. With good painting you can get a good realistic result, but nearly everything is moulded together and can look a solid block instead of a intricate piece of machinery.
You get a one box and two bunches of projectiles too.

The figures are expressive and quite nice, very finely moulded, where you can see all the detail, but again we have problems. Their dimensions! they measure all of them 1,95 metres at the least! they look huge and gigantic along other, proper 1/72 figures. They even look tall along other Italeri modern figures, which are already big. The other criticism they might be a bit static, as only two men are actually doing something besides standing there. No wonder why the Italians lost the war, if they were so static as this set suggests!
On the positive side, you get a good quantity of men, a very generous one, and the figures are full of expression, you can see clearly all their faces.The commander giving orders is very expressive and well made.

There is no kit alternative to this gun and men, and it is a interesting subject, not one which we are tired to see everywhere, so my veredict, is even considering their problems and limitations, is that they should be bought and built! they are made to please the wargamer, but the modeller can also improve the kit. The crew will be useful to man other artillery, although they will possibly look strange along smaller figures or artillery, so very careful distribution will have to be planned.

There wasn't much to choose, I was thinking at first that it also participated in the war in plain green, (and I even painted it like that at first) but I couldn't find any reference, and all the same then the crew wouldn't have been accurate, so I repainted it in sand colours. To make something, I painted the crew green as wearing the early uniform.

If you have read and enjoyed this review, I will greatly appreciate that you make 1 or 2 clicks on the ads on this blog, that will help me in keep making more reviews! (if you can't see the advertising just turn off Adblock or add this blog to the exemption list) 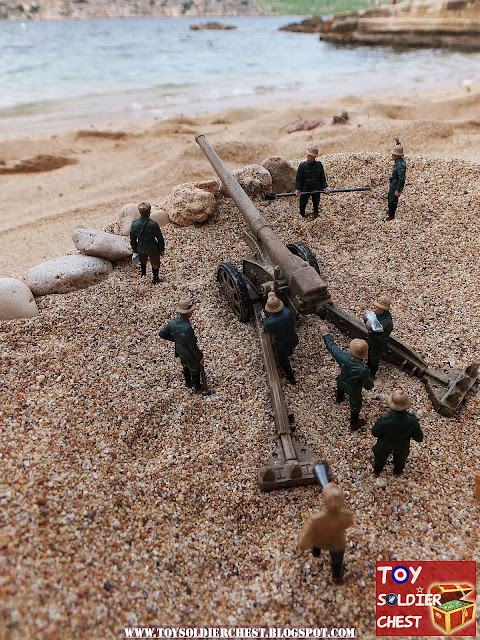 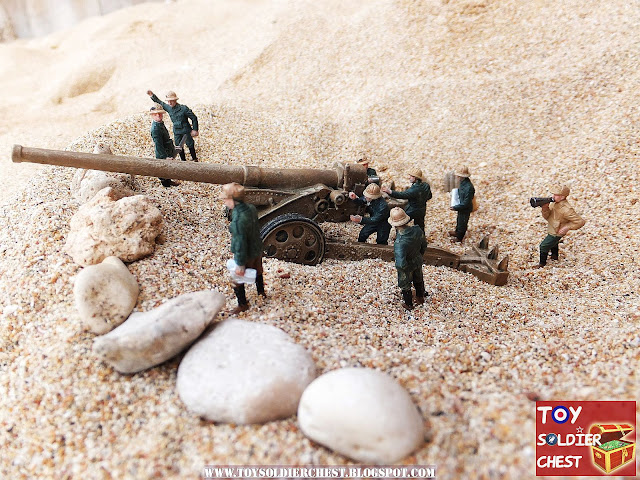 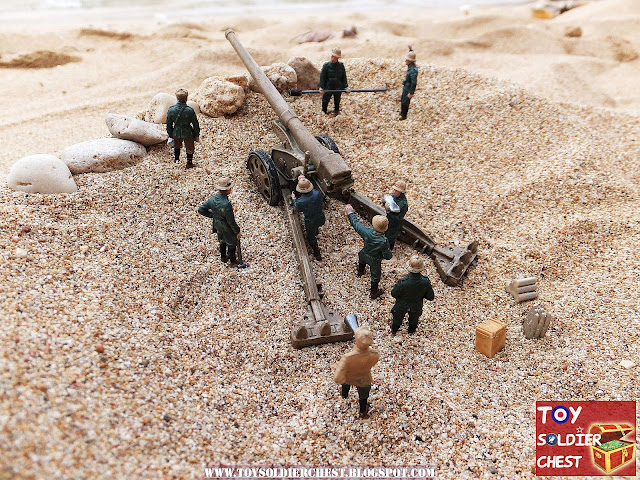 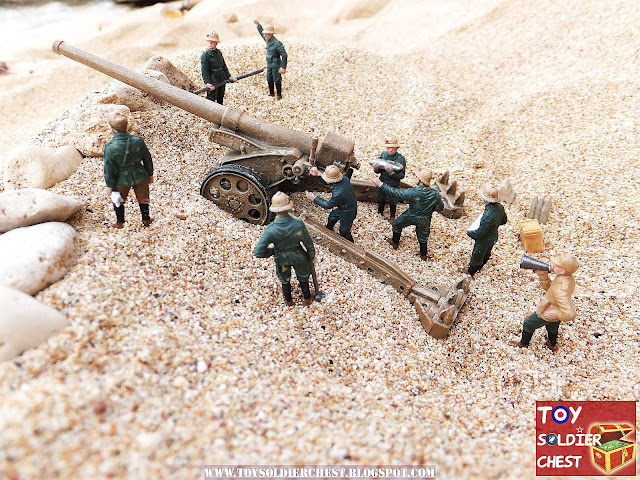 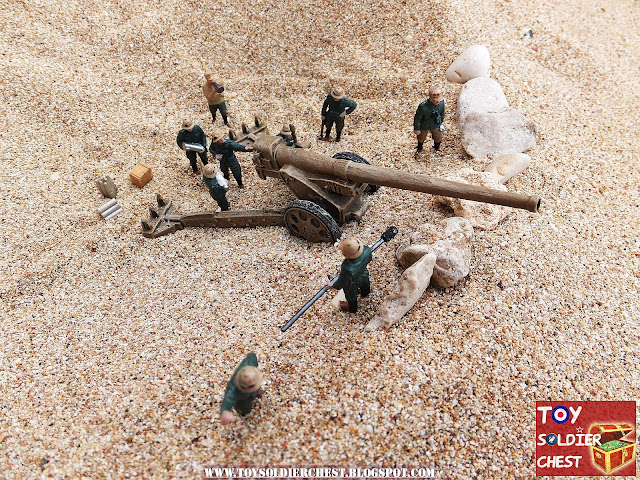 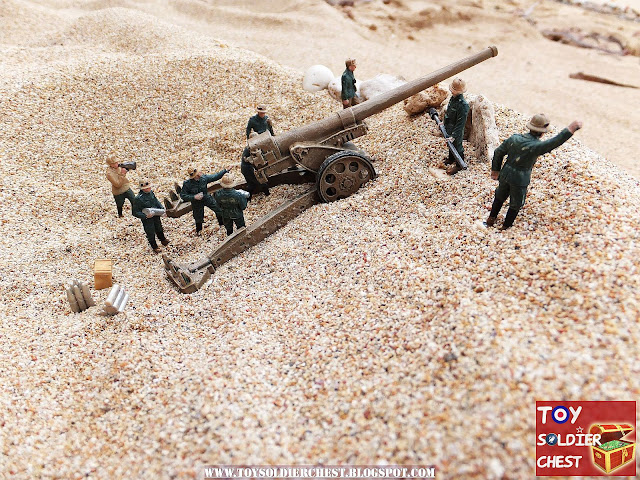 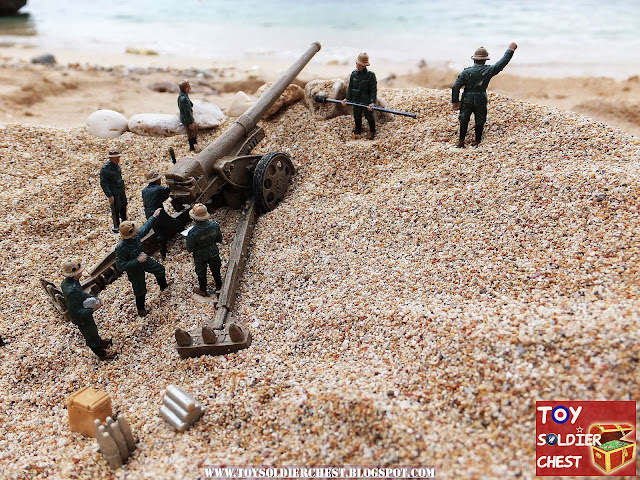 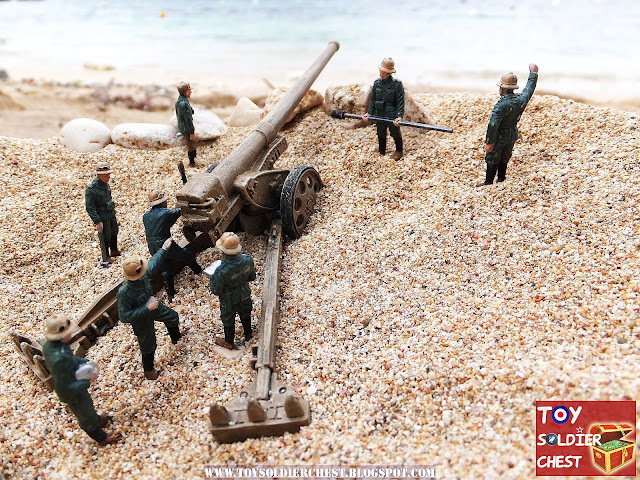