A truly super classic, one of the best sets from Airfix, from the deep and muddy trenches of the Somme comes the German WW1 Infantry!!! 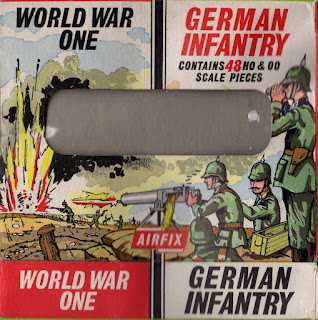 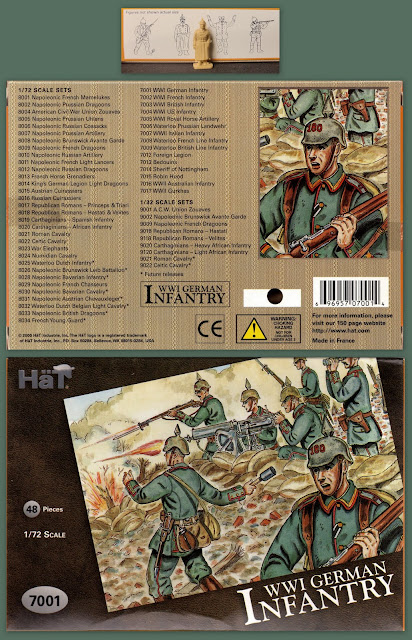 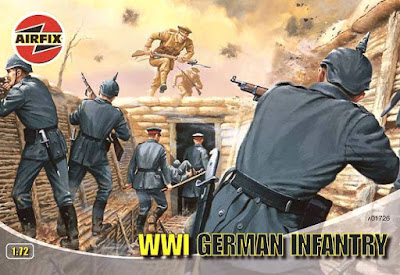 Looks like a comic strip from the 1930s. It looks like you are going to have some very skinny soldiers like the  1st release of WW2 German Soldiers. Lucky that at those times there were windows in the boxes so you saw what you were really getting.
Now comes the classic box, the one most used. Full of life you must say, although in the illustration they wear cloth covers on their helmets, which none of the soldier does. It is different from the typical illustration, but I really miss seeing more of the actual soldiers you are getting, you see better the British soldier than the Germans you are buying!
Finally, as an alternative, we can see at the artwork of Hat, which during some time were the only producers of this set. Frankly, in my opinion one of the worst artworks of plastic soldier history, it looks like a medieval miniature representation of WW1. 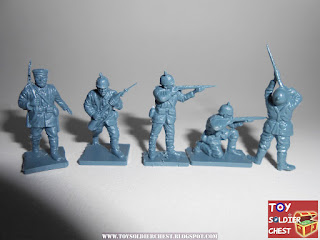 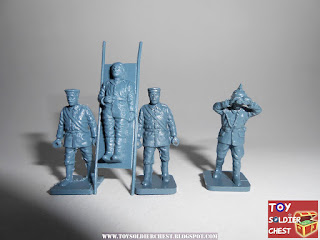 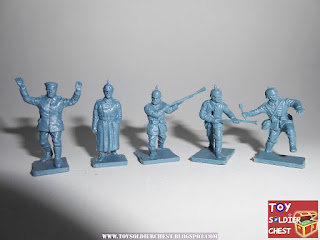 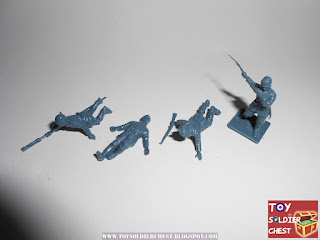 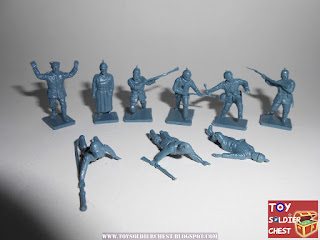 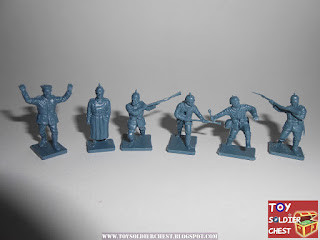 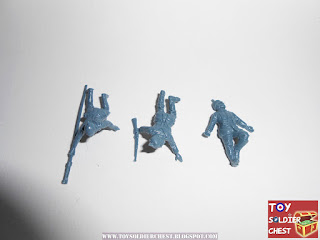 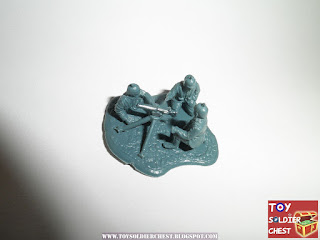 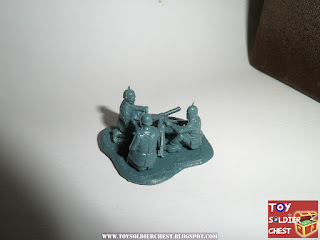 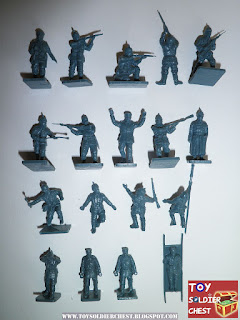 The Figures; representing the first and most iconic of the German Infantry at WW1, with the spiked helmet.
These figures differ from nearly all other Airfix sets, as they are very chubby and fat looking, maybe only like the British WW2 Paratroopers. This makes them look very different and unique. The range of poses is simply impressive. 20 different poses makes me wish all sets where like this one!
It is a very fun set too, really it has everything you could ask for. A man surrendering, a casualty, a soldier with a rocket launcher (which, although not widespread, is historically correct), the commander, which has been fantastically portrayed, Airfix nailed the Prussian nobility of this man, and the medical staff carrying a wounded man.
It is also, one of the few sets which has two men about to hit with their rifles, and at least one of them, looks mighty strange. (although you could think this as being a bit stupid and unrealistic, during WW1 it was very common that weapons got stuck by poor ammunition cartridge quality, and terrible, desperate hand fights with rifles and bayonets went on both on the forests and trenches).
The grenade thrower has a beautiful greek athletic pose, and it seems that it will throw his grenade at any moment. The other men might be a bit static, but then again, it was mainly a defensive war, so no complaints either in this aspect.
The casualty one must admit it looks quite strange, at least it is different than the usual casualties given. As it is strange also the prone man looking at his left side.
The machine gun team is a must in any German WW1 set (who could imagine a set without a Maxim gun?), and maybe the most weak spot in this set. The three men seems to be discuting on how to operate the machine gun, or the rise on the prices of frankfurters. None of them seems to be really in combat, and the Maxim is poorly done, and it is very small and puny (and it has huge tendency to get lost as it doesn't fit well either). And you could that three men are unnecesary for such activity.
Figure Production; The figures are the examples of the best figures picked up from various sets I've been amassing through lots purchased from the internet, and sadly there is many qualities to be found. It looks as if the first sets were very nice, without no flash and very crisp, but as production went on, you can find some examples with astounding quantities of flash, making it one of the worst Airfix in this respect. Also, some soldiers ended up losing their feet on the mud! as you can look at the grenade thrower, or the man hitting with his rifle, one of their foots is completely invisible, while there are some examples where this doesn't happen so clearly. Also, some soldiers end up with reduced spikes on their helmets. However, I've had some modern reissues on my hands and these doesn't look so bad, so maybe the problem now has been reduced.
Veredict; All in all, my favourite German WW1 Infantry, and my favourite set amongs the other Airfix WW1 sets. Possibly, even my favourite WW1 set from any manufacturers.... at a dirt cheap price, and being easily available on the shops and internet, I can't see any reason you shouldn't get this set. Possibly the Airfix set which better has survived the passage of time.

I curiously discovered these soldiers as "WW2 Romanians", as I bought a bootleg set back in my childhood years. Of course, I inmediately realized these were really WW1 Germans for the spiked helmets, no matter I was 6 years old :) . (I suppose they were labelled as such as the shape of the helmet was slightly similar). The bootleg version were very much smaller than the originals, which made them more similar to the other Airfix sets, and they came in a nice yellow and orange-pinkish colour.