Another Caesar set to review, will this be another top notch set with excellent sculpting, or a boring and meaninglesss set? 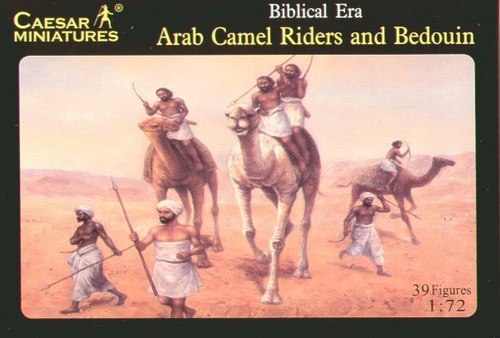 Maybe one of the best Caesar box arts, at least they seem rather human. All the same, compare it to nearly any other manufacturer and you won't buy these for the box. The camels seem gigantic, and the perspective is not right, but it gives a sensation of heat, and depicts correctly what you get (which is not difficult, you'll see why later).

I am not complaining about the quality of details, lifelikeness of the figures, nor anatomic proportions, which are nearly a 10. But there are a couple of weird poses with spears, that although they could win a prize on "never done before" this is probably because you would never be in that pose if you carried a spear.

Besides that, probably the camel is a bit too big, and seems very strange looking, ( a bit like an elongated hamster ) , if compared to camels from other manufacturers.

This is a double-edged question; did Bedouins in this period wear turbans, that sort of skirt, and were their weapons  spears, sickles and bows? Indeed, for what we know (mainly some egyptian reliefs) that is a big yes. And the reliefs normally don't lie, so that is that.

But will everybody wear absolutely the same, including having nearly the same face and beard? Most probably not. God, they didn't even make someone without a turban, besides the camel riders. It is like having the same man in all the different poses, you could make a stop-motion movie with them!!

So yes, they are historically accurate. But in my opinion, after buying this set, you have just "Light and Medium Bedouin Infantry".

Caesar many times strives for total historical accuracy, and they don't want to enter in any sort of controversy, so if they find a relief that just shows a warrior, you'll get 42 figures of that warrior.

Besides representing Bedouins from Biblical times until nearly the advent of Mahomet, you could use some as light skirmishers in medieval arab armies, some with a bit of conversion for Indian and Muslim kingdoms. The good thing, is that you just have to add something with sculpting , so they could be a very good base to represent Arabs and men with turbans throughout the ages.
FUNNESS - 3.0

I was quite disappointed after buying this set. It was an expensive one at that time (11,99 €, when most sets were 7,99 or less) and I expected something like the Trojan army, also from Caesar. Instead, even the supposed leader is exactly the same as the other men. I know that there isn't more information, but I think that with a bit of research and a bit of imagination you could have made them more interesting and appealing.


It seems that, for example, with sets like the Trojan Army, there was a very deep research, and the result was very good. Here, it seems they looked the Osprey where the camel riders appeared, saw a relief which showed the standard Bedouin, and here we go, we have a set. The funness in this set it is on the double-ridden camel.

This is a very good set for wargaming. You are given all the different sorts of troops, and in good ratio (albeit if a bit too many armoured men without spears maybe, this seems to represent an  elite Hittite army), so it scores high here. Some sort of standard bearer and king is the only thing it lacks to be a ten.

As with most Caesar Miniatures, you can find them for 8 GBP shipped from Hong Kong, which is better than what I paid at a retail store.